You Can Do Meetings Better! This Venue Has the Design, the Flexibility, and the Tech to Help

Most of us have seen our fair share of uninspired boardrooms and cheerless meeting rooms – an awkwardly large table, a collection of sad office chairs, a teleconferencing phone that looks like something from the set of the original Star Trek. Seeing as these are the places where big ideas, important decisions, and new avenues of thought are meant to be hatched and talked out, it’s about time we approached these spaces a little differently, wouldn’t you say?

The team behind the Ideation Centre certainly thinks so. Located in downtown Calgary (inside Calgary TELUS Convention Centre), the Ideation Centre was carefully conceptualized and thoughtfully designed to foster collaboration and creativity in a space that works just as hard as you do. To show you what that means, let’s run through three ways the Ideation Centre is set up to take your meeting to another (better) level. 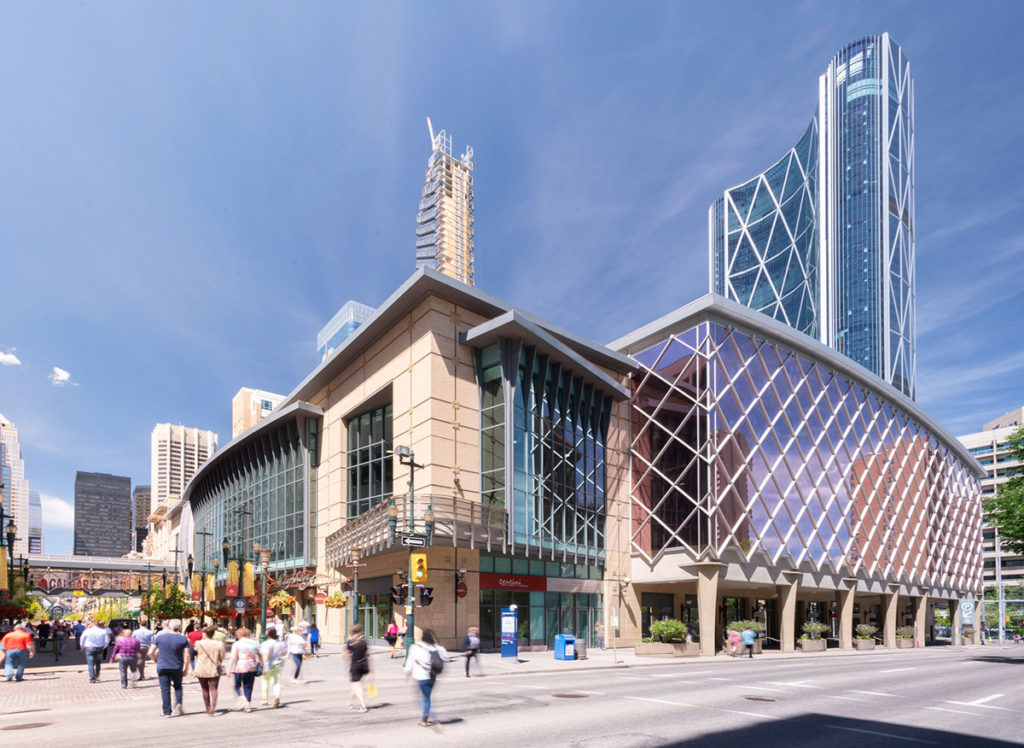 1. A space for humans to meet, that was actually made with humans in mind.
The Ideation Centre is described as “human-centred” – the space was designed with purpose as an environment that makes it easier for people to stay engaged and tuned in, and to focus and participate. Comfort has a lot to do with keeping your mind in the game during a long or intense meeting, as does the general appeal of your surroundings. Furnishings in each room are playful and inviting, with fun pops of colour against an overall bright white slate, but this playfulness doesn’t sacrifice function. Everything from individual desks and chairs to the various configurations of each space has been considered against the foundations of ergonomic science.

Dropping onto a chair at 9am and stiffly rising from that same chair at 5pm is probably not a sign that you’ve been engaged and actively participating in a highly productive, uber-inspiring meeting all day. Spaces at the Ideation Centre are meant to not only facilitate conversation and engagement, but to encourage movement and interaction. Imagination and creativity will flourish – and your back will thank you tomorrow. 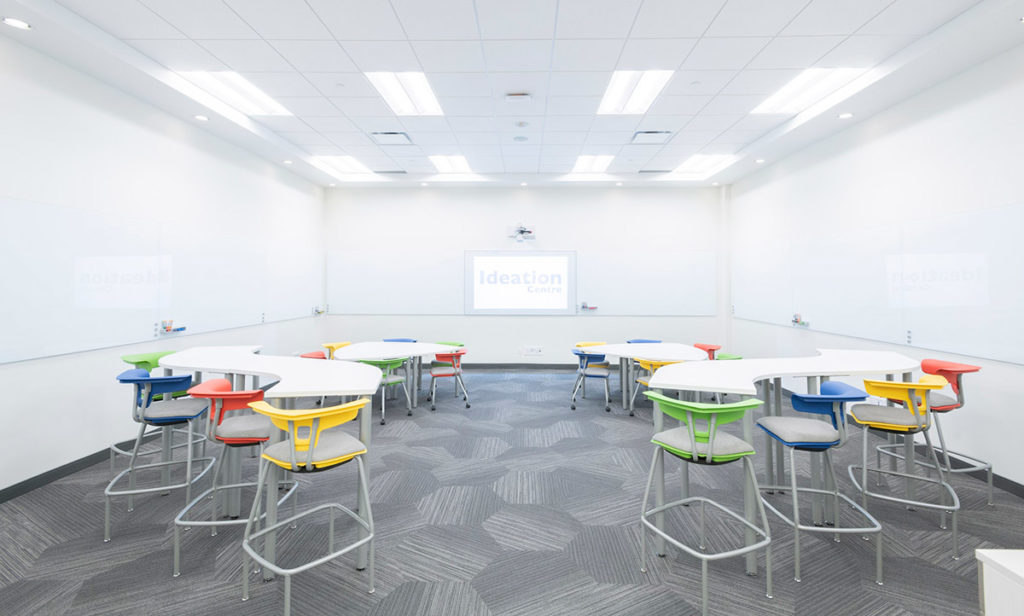 2. Flexibility to design the space around your meeting, so that you don’t have to design your meeting around a space.
The human-centred approach also means you’re in the driver’s seat when it comes to finalizing the layout for your event. Each of the Ideation Centre’s 4 unique break-out rooms, which are self-contained with the Centre’s footprint, has a number of comfortable seating configurations that give you flexibility within the established spaces. Furniture can be moved around to accomodate your needs, and each room can be used in unique ways throughout your day or for different groups. All of this is again intended to facilitate interaction between attendees, and let creativity flourish freely. The pre-function area allows for mingling during breaks and provides a space for food and beverage, while each room also has a coffee station stocked by catering partners Calgary Marriott Downtown. 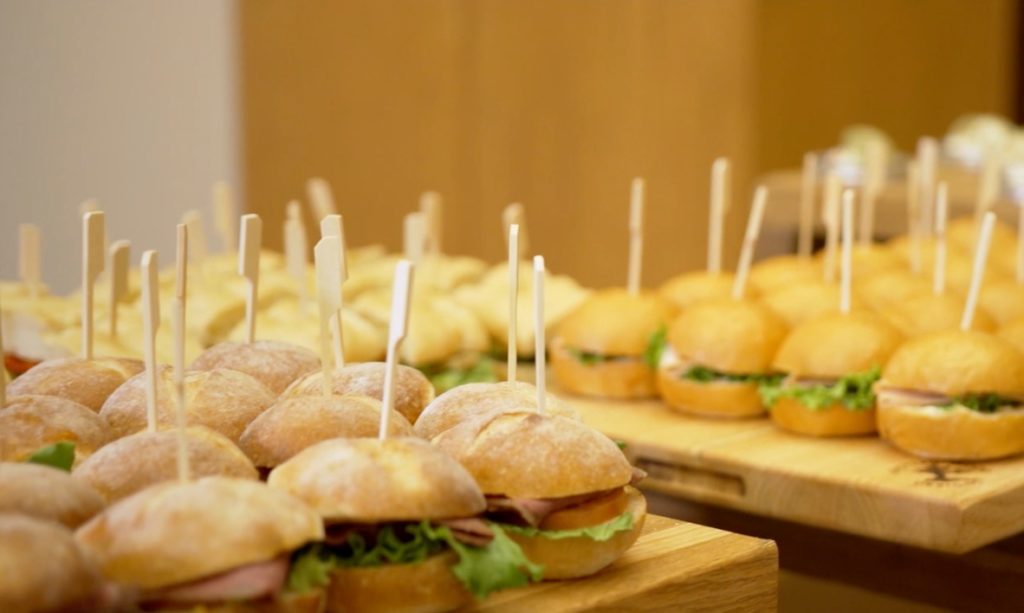 3. All of the meeting technology you want, with zero extra effort.
One of life’s great ironies is that while technology is almost always intended to make our lives easier, it often does just the opposite, at least initially. In this case, however, your tech dreams have come true, and it literally could not be easier.

Rooms at the Ideation Centre come equipped with modern meeting tech like projection-ready, multi-use magnetic glass whiteboards, smartboards, built-in projectors, and large two-way computer-enabled monitors. Of course, high-speed wifi is available, and rooms are also wired for conference calls, in case some of your team isn’t lucky enough to be there in person.

Meetings spaces have so much more potential than we often expect or demand. Let’s do better!

Whether we’re looking at creating completely surprising meeting spaces and breakout rooms for conferences, or we’re utilizing a forward-thinking space like the Ideation Centre for a more self-contained meeting, doing meetings better is something we’ve been thinking about a lot lately. The best original thought and creative action happens when we not only bring the right people together, but we give those people spaces that allow them to work without distraction, move and interact freely, and truly connect. When people are able to be spontaneous, relaxed, and focused, great meetings happen.

If you’ve got a big meeting coming up on your calendar, we’d really love to talk to you about how you can go way, way beyond the expected and give your attendees a space that will work with and for them. Get in touch with us right here, and let’s meet up. 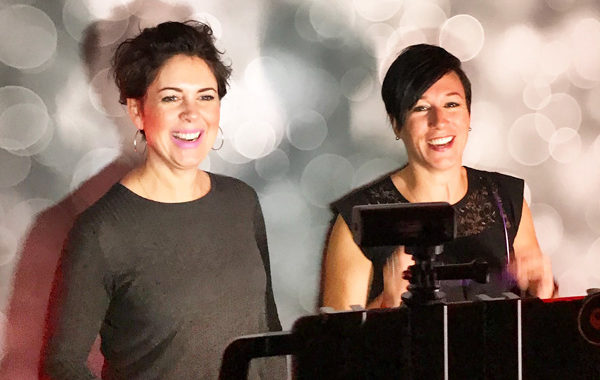 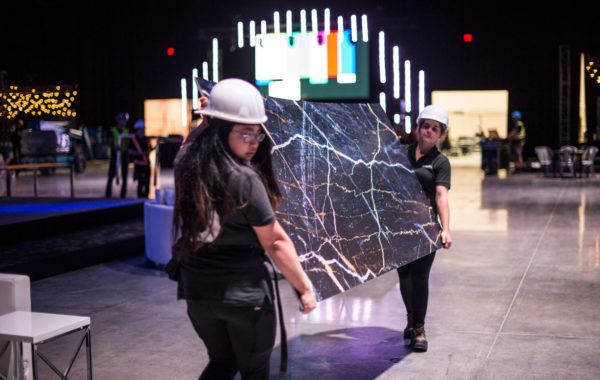 Safety first! And last. And everywhere in between.

A quick look at recent changes to the OHS Act, plus a resource to get you started 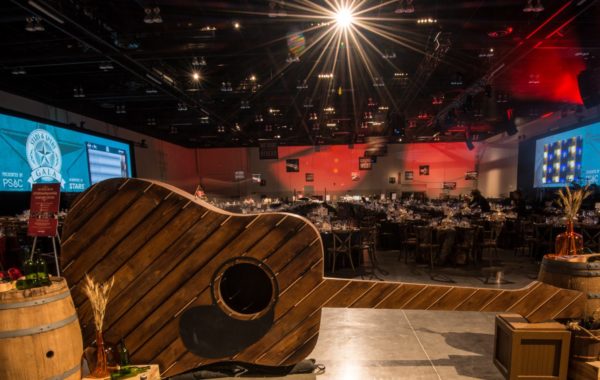 Landing helicopters and stringing guitars, all for a great cause 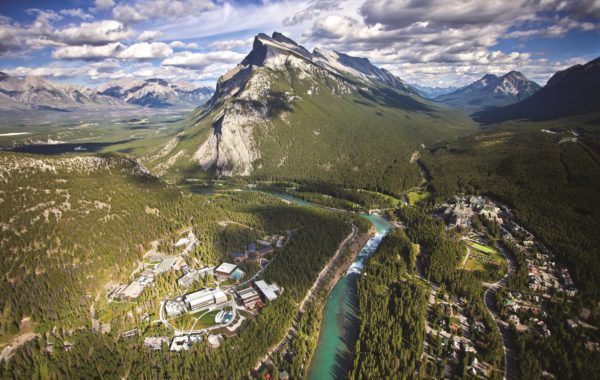 Banff Centre: A hub for artists, a catalyst for creatives, and the ultimate venue.

Meet the artsy campus in the middle of the Rockies that just might be hiding your perfect event space.